Specialty Pistols
Weekend Squirrel Hunt, Pic Added
This topic can be found at:
https://specialtypistols.infopop.cc/eve/forums/a/tpc/f/7551081472/m/1530049886
Gary T
Weekend Squirrel Hunt, Pic Added
Hey guys,
Of the various types of hunting, squirrel hunting was my first love. And though I still like to squirrel hunt, deer hunting has nudged out a lot of the time I used to spend in the woods deer hunting. Just a few weeks ago my hunting buddy cousin and I were talking about how we used to spend the month of October squirrel hunting, but now mainly spend it preparing to deer season.

So I went on my first squirrel hunt of the season last Saturday. The weather was hotter and more humid than I wanted, but I survived it nevertheless. Since it was "Youth Deer Hunt Weekend", I had to wear hunter orange. Nevertheless, the squirrels didn't seem to matter. Despite it being only November, the squirrels were mostly on the ground; that always makes the hunt more challenging.

I hunted w/ my 40 year old Ruger 10/22. It was upgraded a few years ago w/ a Hogue stock, Fedderson threaded barrel, Burris 4.5-14X scope, Silencerco Spectre suppressor and some new internal parts. I've been really pleased w/ the renovation. I ended up w/ 4 squirrels, but I just flat out missed one that I really should've hit. Looking back on the shot, there may've been some vines between me and the squirrel. Nevertheless, the outing was very much needed as it served as a "tune up" for my hunting/shooting skills in preparation for deer season.

Flickr misbehaved for a while so that I couldn't post my pic earlier, but it's ok now. 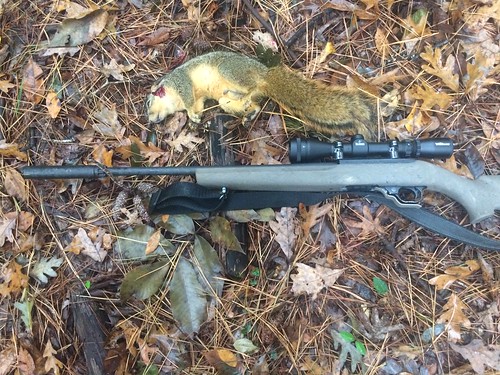 This message has been edited. Last edited by: Gary T,

Magnum Mike
I actually got out myself for the first time in years! I only got a couple but had a great time and remembered why I always enjoyed that time of the year and being in the woods. Didn't use a handgun, cuz I thought I get out more than once and it didn't happen, but I did use my Spectre which made the trip all the more enjoyable. Most all the squirrels I seen we're on the ground, also, but that made it more like big game hunting!

redhaven
Good work gentlemen! I love squirrel hunting. I should have went last weekend, but had honey do list to compmete....
jhalcott
Soon as I can walk more than a county block I plan on taking a TC Contender out for squirrels. Brings back fond memories of a little kid with his Grampop.
Leupold Man
Nice always love a good small game hunt!