Specialty Pistols
Synthetic Stock for Savage Target Action
This topic can be found at:
https://specialtypistols.infopop.cc/eve/forums/a/tpc/f/3826077864/m/9010043876
DCamm94
Synthetic Stock for Savage Target Action
I'm building a 7mm WSM on a target action, and I've searched up and down for anyone that makes a synthetic handgun stock/chassis for this action. I'll I've found are the 7fingers, the Russo, and Tony's. I did see through searching on the forum that at least at one time, Jim See was selling laminates in the Neal Cooper design, but I saw a pic a while back that looked like a Neal Cooper synthetic. I've sent Jim an email and waiting for a reply.

The reason I ask is because my barrel alone is 4lbs, and I don't really need the extra weight at this point. Thanks for any help.

tinkerer
Maybe a maple based laminate would come close. Or maybe a nice curly maple. At least they are available.

Larry
Tinkerer
chuckhunter
I have a 7WSM in a Cooper laminated stock. My barrel is 15" plus brake and about 1" dia. behind the brake. It works great.
Tom
DCamm94
Thanks. I've seen a couple of Tony's designs that I like for this project. If I find something else out there that speaks to me, I'll post it here. I appreciate the replies.

DaveC
I bought a rifle stock and cut it for mine. The Savage Target Action weights 4 pounds alone, the barrel plus stock ans soon it weights more then a rifle. 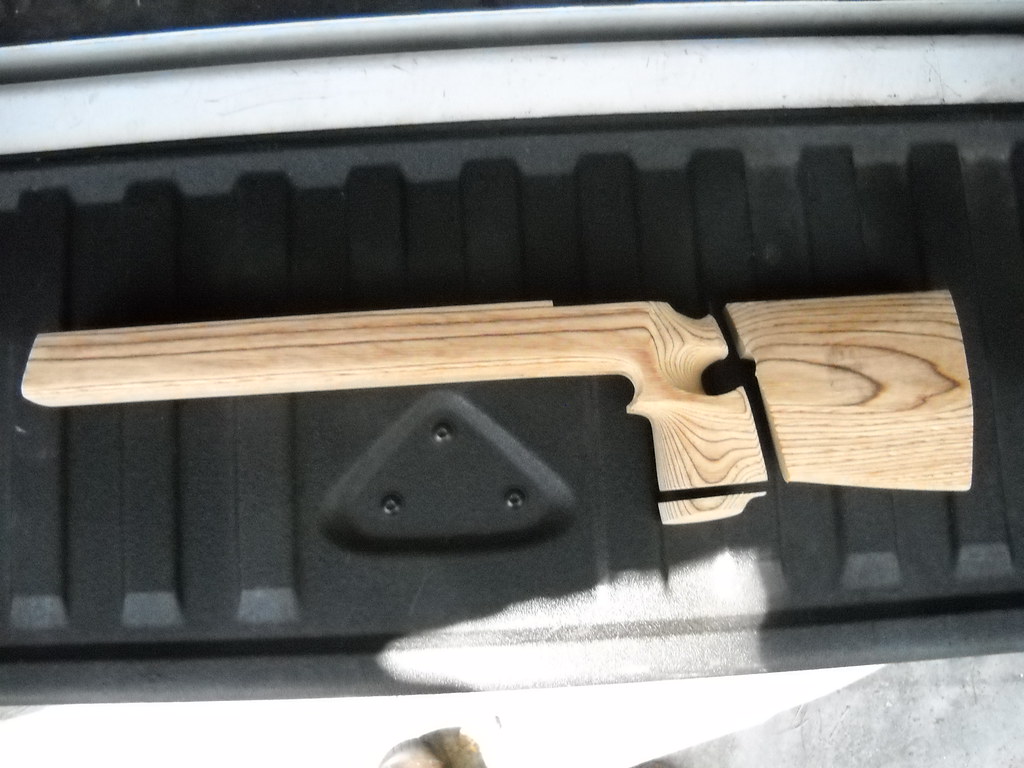 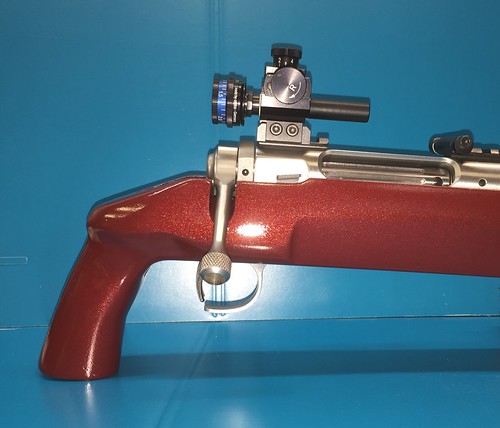 TXBRASS
MDT makes 2 chassis for it as well as PDC Customs.

Iowa Fox
In the last 6 weeks I have searched high and low for a stock for a Savage Target Action. Once upon a time 2009-2012 Neal Cooper was turning out some nice center core stocks. Those are gone, forever. The aluminum chassis are nice but they are expensive, heavy, and I have a feeling they would get hot out in the all day summer sun. Tony is doing Neals stocks but he is pillar bedding using the front two screws of the action and leaving the rear blank. Not what I'm looking for. Last week I ordered a Choate and was going to give it the hack saw treatment like Jeremy. After telling them no less than 10 times 4.4 bolt spacing I got a 4.2 Friday. Maybe I can exchange it, I hope. I like the aluminum bedding block in the stock but its a heavy stock. I wish they made a genuine handgun stock. The problem as I see it is the specialty pistol shooters are a shrinking bunch with limited sales and I have a felling its going to continue shrinking.

The search continues. I was so happy with my breakopen pistols until I went to Wyoming.
Iowa Fox
I received an exchange stock via UPS today with 4.4 bolt spacing and Choate issued a pickup label for the incorrect stock. I can't say enough positive things about the way they took care of me. The folks at Choate are great people. I was concerned since I ordered a second they might not have one to exchange. My receiver fits the aluminum bedding block like a glove. I'll give it the hacksaw treatment this winter. Well thats two parts for 2016. I'm going to order number 3 next week, the barrel.

I think Jeremy's reworked Choate turned out well for him. It's what gave me the final insiration to pursue this direction. RobertHopkins
Iowa Fox, I'm building a savage striker using savage target action. I want to use the Choate rifle stock reworked to fit a savage target action for a pistol, you talked about in you post,Do you remember the stock # or code # of that stock. I like to use a synthetic stock with the aluminum bedding block.

My Target action is a right bolt right port with a screw spacing of 4.410 The dual port used a different screw spacing for sure and I don't think Choate makes a stock for that one. The stock that I got from Choate is a 24-06-04 varmint stock. This stock is for the Savage short action centerfeed with 4.410 screw spacing.

I emailed Choate to see if they might have a second or a blem since I would be taking the saw to it. I was pleased when they responded that they did for $100 dollars & 10.50 shipping. The first one I got had the wrong screw spacing but Choate was quick to correct the error by shipping the correct blem stock and have UPS pickup the incorrect one. They are very good and friendly folks to work with. I couldn't see anything on either stock to make them a second. I mounted my action in the stock and it fit the V-Block nice and solid. I don't have a barrel yet but it is on order. I haven't cut the sock yet but I'm hoping I can get to about 3 pounds after cutting the butt and forend off. You can only cut them at about the length of Jeremy's in the photo because of the baffle in the stock. If you cut them any shorter you will wind up with a big hollow spot under the barrel at the forend tip. Not that it would hurt anything, just wouldn't look good.

I looked until I was blue in the face for a stock for the target action and for the dollars spent this seemed like the best option. I think Jeremy's turned out looking nice and I know some of the other guys here have chopped them up also.

Good Luck on your project and keep us informed of your progress.

Jon
RobertHopkins
Will do, I'm retiring at the end of December 2015, after 32 years from DOD as a water plant supervisor and moving back to the lower 48 from Fairbanks Alaska. Arizona and Texas has made the short list to call home. This project will be one of many retirement gifts to myself.

Thanks for your help.
Robert,
Da-Law-Dawg
Thanks for the kind words John! The choate stocks are easy to modify and rework. I will be refining my stock a bit from WY-SHOT as I threw it together for the trip. I shortened the nose about 3-4" and added weight in the grip. Grip was easy as I mixed lead shot and epoxy and filled the grip hollow with it. I took the grip cap, used bedding compound and smoothed it all in. Worked well during our foray on the prairie dogs. Hoggin and I both managed a P-Dog at 525 yards during our last day afield with it.