Specialty Pistols
20 VarTarg Build, Part 1
This topic can be found at:
https://specialtypistols.infopop.cc/eve/forums/a/tpc/f/3826077864/m/3260021007
Gary T
20 VarTarg Build, Part 1
I like to go on prairie dog hunts. For many years my main pd hunting guns were an XP-100 in 22 BR and a T/C Contender in 223 Rem. The 223 later found itself replaced by an XP in 6BR. I’ve hunted with these two handguns many years and have been very satisfied. Nevertheless, a few years ago I started thinking about a building a 20 VarTarg using a Savage Striker and prefit custom barrel. Other projects moved to the forefront and the 20 VarTarg build was pushed to the back of the line. Last summer I bought a Nosler Custom Handgun in 22 Nosler. It performed very well in its virgin pd hunt. Although I had a perfectly fine group of pd hunting guns, I didn’t feel “fulfilled”. My mind again started thinking about the 20 VarTarg. Periodically my pd hunting buddies will comment on how loud my handguns are. I wondered, “How much more quiet would a suppressed 20 VarTarg specialty pistol be?” I eventually settled on building a 20 VarTarg specialty pistol . About the same time I came across an article on the Howa Mini-Action. The Mini-Action is basically a bolt action that’s downsized for the 223 Rem class of cartridges. Although the Mini-Action is chambered in 223, I wanted something a little different. Enter the 20 VarTarg. Brownell’s sells the Mini-Action with a number of different barrel options, including the 223 Rem. After some reflection, I decided to buy a Mini-Action with a factory 223 Rem barrel and install a custom VarTarg barrel. Here’s how the build has evolved.

Stock: Since this was going to be a specialty pistol, I’d need a handgun stock. I found the answer here on SP, a “Elf Owl Chassis” from JTAC Industries. https://jtacindustries.com/products/elf-owl-chassis. JTAC says the Mini-Action barreled action is undesignated by Howa so a handgun build would be legal. I chose a 9.5” handguard, no brace/butt stock and had it painted in Coyote Tan Cerakote. The wait was about 8 weeks, as quoted.

Howa Mini-Action: When I ordered my barreled action (available only from Brownell’s), all calibers were out of stock except for 6.5 Grendel. Since the Grendel and 20 VarTarg have different sized bolt face and the distributor doesn’t sell additional bolts, the Grendel wasn’t an option. I had to wait 3 months for Brownell’s to fulfill the order for the 223 Rem. When the barreled action arrived, I was surprised a detachable box magazine was not included. After a couple long phone calls with Customer Service, Brownell’s had the distributer (Legacy Sports) send me a 10 round magazine. The magazine is proprietary and prices start at $35. The magazine is entirely plastic and looks like it came in a box of Cracker Jacks. I’ll do a full review of the action later.

Hand grip: The stock is designed to use AR-15 grips, but doesn’t come with one. The first grip I bought had a beavertail and didn’t fit. After an e-mail to JTAC I found out a beavertail grip won’t fit. I then bought a Hogue grip that’s just like the one on the Nosler Custom Handgun. It feels fine and fits good.

Dies: This was a problem. When I was putting the build together in the fall of ’20, even common handloading dies couldn’t be found. My intention was to use 20 VarTarg Redding full length bushing and micrometer seater dies. Unfortunately, the dies were not available and were much more expensive than usual. There weren’t many other options since only Redding, Hornady and RCBS make VarTarg dies. After a few months, the dies were still unavailable so I decided to go a different route and get a Hornady full length die and LE Wilson inline neck sizing and seater dies. This would be my first time to use inline dies. Since I have a 20 Practical and 223 Rem, I also decided to get 223 Rem inline dies with an accessory decapping stem and die cap so that with the appropriate neck bushing, I could use the same die body to load both 223 and 20 Practical. The wait for the FL die and the Wilson dies was only one month. The Wilson dies are very high quality.

Arbor press: Since this would be my first time to use inline dies, I needed an arbor press. I found a good looking one from Bald Eagle on www.grizzly.com and bought it. Unfortunately, the press can’t be tightened enough to keep it from moving during the resizing process. I wanted to replace it with a press from 21st Century, but they were a month behind processing orders. I next turned to Midway and bought a standard K&M arbor press. I really like it.

Powder, primers and brass: Since I’d been planning this project for a while I already had Lapua 221 Fireball Brass. Fortunately, I have a decent supply of different small rifle primers and 20 caliber bullets in my inventory. Since I use IMR 4227 and Hodgdon CFE BLK for my 221 Fireball, I thought I’d try them first with the VarTarg.

Barrel: I’ve converted two Stevens Model 200 bolt action rifles into pd hunting rifles. Both started at 270 Win, but morphed into 221 Fireball and 20 Practical. The VarTarg build would use a Savage type barrel nut to set the headspace. Although a lot of folks make custom Savage “prefit” barrels, there are not many “Howage” prefit barrels. I wanted to go with Shilen, but they don’t make barrels for the Howage. Since McGowen makes barrels for the Howage setup, I decided to go with them. My 221 Fireball rifle has a McGowen barrel and it’s been very satisfying. The McGowen stainless steel barrel is 16” long, has a 1:11 twist and measures 0.8” diameter at the threaded muzzle.

Optics: I decided to pull a Burris 3-12x handgun scope from one of my XP’s. Like usual, I used Burris Signature Z rings. I was surprised to find there weren’t many scope bases for the Mini-Action. Outer Impact is one of the few companies that makes one. It looked good, so I bought one.

Headspace gauges: With my prior projects I’ve rented “Go” and “No go” gauges from 4 D Reamer Rentals (https://4drentals.com) and been pleased with them. I decided to use them again.

Suppressor: I ordered a 30 caliber SilencerCo Harvester suppressor in November ’20, shortly after the election. I was very impressed how easy the process was using the kiosk at the store. I’ve got my fingers crossed, hoping the suppressor arrives before the spring pd hunt. I hope to use this suppressor on a number of guns, starting with the 20 VarTarg and the 22 Nosler.

When the barreled action and JTAC stock arrived, I put them together to shoot some 223 Rem ammo. I was pleased to see it shoot groups from 0.78”-2.5” at 100 yards, using ammo loaded for my Contender. Some loads were too long to shoot from the magazine; all other rounds fed smoothly. Howa guarantees the factory barrel to shoot 1” groups or less. I’d like to use the factory barrel for a project, but I don’t know what it would be as the threads are metric.

Things were proceeding smoothly until I tried to remove the factory barrel. I’d read on the ‘net that Howa barrels were frequently difficult to remove. I already had a Remington/Howa receiver wrench so I bought a barrel vise (https://greatscottshooters.com/product-category/barrel-vise/) designed to remove factory barrels. Although it’s a well designed vise, but the barrel didn’t budge. Despite soaking the barrel in Kroil, Liquid Wrench and PB Blaster for weeks and applying mild heat I couldn’t remove the barrel. Fortunately, I found a local gunsmith who removed it using the barrel vise I “almost” bought. While we were talking guns, I found out he couldn’t shoot his new 300 Black Out since he was out of small rifle primers. I was initially quoted a turn around of 1-2 weeks on the job. After I offered to pay for the job using 1000 small rifle primers, the barrel was off in < 24 hours.

So Part 1 is coming to a happy ending, although there have been problems. Part 2 will start soon with the arrival of the “Go” and “No go” gauges and installation of the custom barrel. After that, I’ll start on load development. I plan on first loading the Varmageddon Plastic Tipped 32 gr bullets. 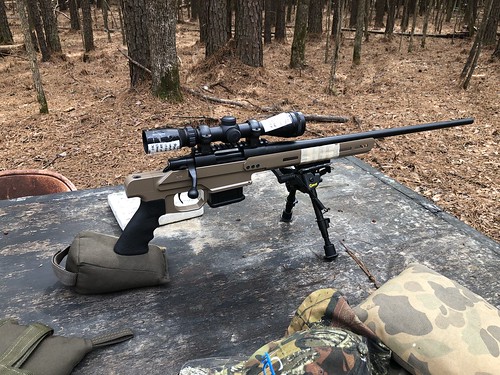 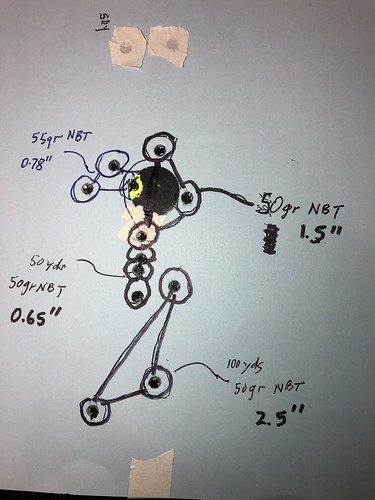 The barrel is off. The barrel vise came from the gunsmith’s pile of junk metal as it didn’t work well for him. It was not the vise used to remove the factory barrel. 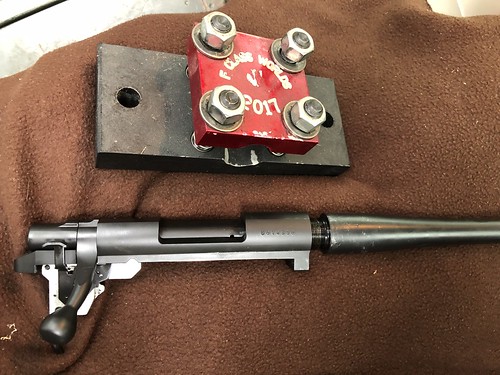 Gator T/C
Great write up (as usual)! I love the feel of the Houge but I do not like the grippy bottom or the angle. I printed a plastic plug for the Houge that is parallel with barrel and it “slides” better shooting from bench.

Be sure to tell us how the action is.
DAN L
Great Write up
Cool Build

DAN
jsh
I parted ways with a CZ527. Short time later I got two of the Howa minis, complete rifles for about $100 more than I got for the CZ! I then ended up with a third as well. 222,223 and a 6.5 Grendel. I wish I had bought a couple more. Word must have gotten out and prices climbed pretty quick.
222, bone stock shot as good as I had been led to believe, my first 222. Procured a Boyd’s pro varmint and new bottom metal, with a bedding job. Now a boring rifle, a tack driver with AA2200 or 4198, 40-50 grain bullets.

The 223..... a problem child, pencil barrel. Bad vertical string after 5 shots. I had enough 223’s and the 222 needed exercise any way.
Same issue as Gary, except we ended up making a relief cut up close to the action, then it spun off by hand, to figure.
I went with Preferred Barrels as I had good luck with the folks at MGM. Went with a 27” 22Nosler (since Gary beat me to the Nosler pistol ;-). Went with a 27”, 3 groove 1-8” twist. Folks want to compare it to the 22-250. Well it’s not, but it will give one a run for its money especially with this longer barrel. I use the 6.5Grendl magazines, works like a champ.
Dropped this into an Oryx chassis. It is a good shooter, though I have come to the conclusion I am not a chassis person.

Can’t leave the 6.5G out. Bought flush mount bottom metal from the “cowboy” at 65Grendel website.
Ordered a stock from Bell an Carlson. A handy good looking rig I get a lot of compliments on.

Look forward to your build progress Gary. I bought the same rail you did, good stuff. The two piece 700 Remington bases will work. May be an advantage with the extra room to top off mags from the top. Where the rail may make you leak red fluid and cuss, already been there,lol.
Jeff

Pa. Mike
Excellent and very detailed write-up , thanks for taking the time to share your project with us!